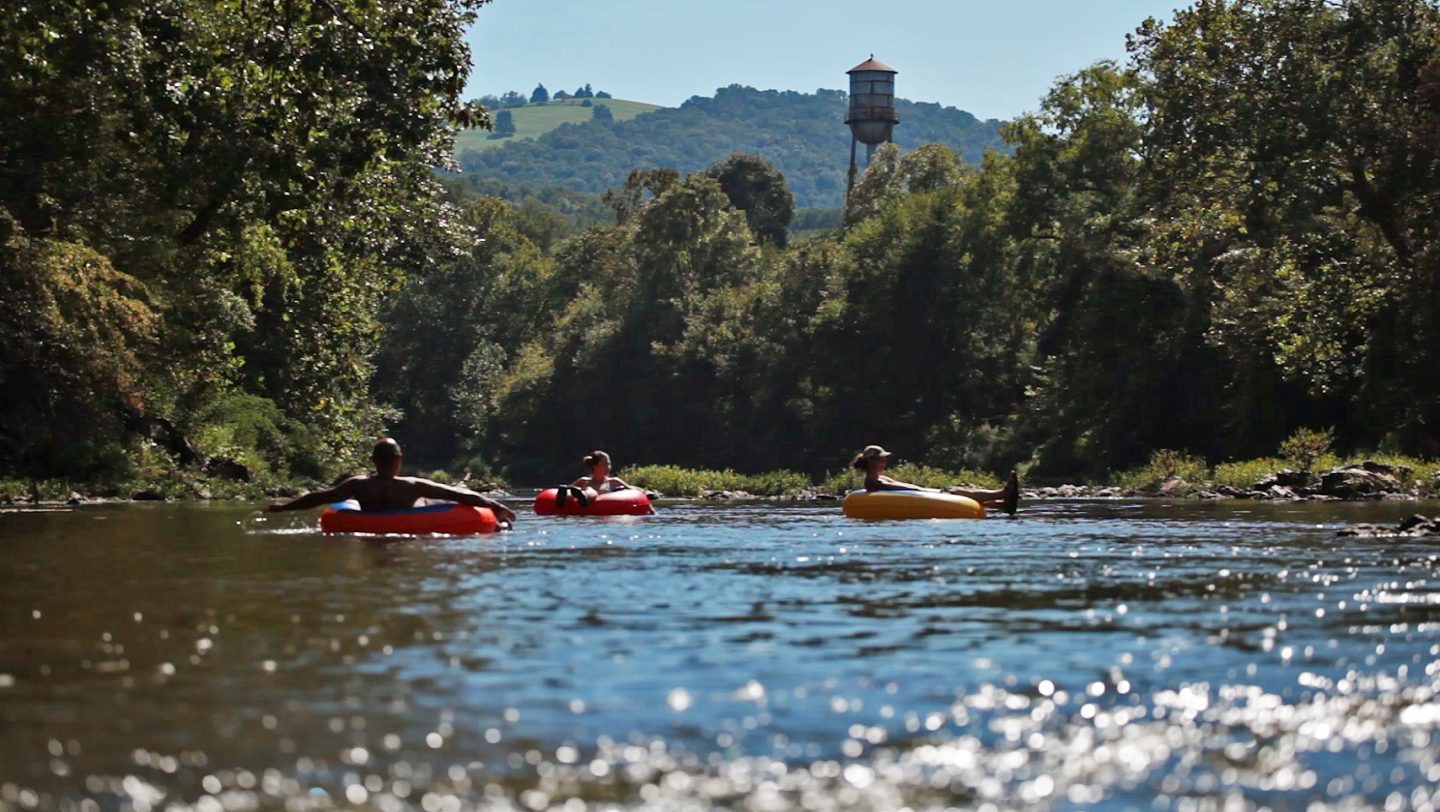 The Rivanna runs 46 miles from its headwaters near Charlottesville to its confluence with the James River in Fluvanna County. On its journey from the Blue Ridge foothills out into the Piedmont plain, the Rivanna meanders through a world of natural scenery that delights the senses and restores the spirit. In recognition of its special beauty and ecological importance, the Virginia General Assembly named the Rivanna the first designated Scenic River in the Commonwealth.

The waters of the Rivanna flow off the steep slopes of the Blue Ridge Mountains. The South Fork of the Rivanna is formed at the confluence of the Mechums and Moormons Rivers near Free Union. The South Fork Rivanna Reservoir, five miles of flatwater created by a dam built near Rt. 29, provides much of the area’s drinking water while serving as a playground for paddlers, rowers, and fishermen. The North Fork of the Rivanna flows out of Northern Albemarle and Greene Counties, where the Lynch River and Beaverdam Creek flow together. From the confluence of its South and North Forks northeast of Charlottesville, the Rivanna runs freely southeast, through Shadwell, Crofton, Palmyra and on to the “Point of Forks” at Columbia on the James.

On the Southeast edge of Charlottesville, the Rivanna flows through the Southwest Mountains, along the base of Monticello Mountain, where rocky ledges and rapids make for exciting paddling. As the river crosses into the Piedmont and Fluvanna County, it takes on a tranquil quality with the occasional fun whitewater, usually created by the remains of an historic dam. The river’s flow is increased along the way by tributaries such as Moore’s Creek, Buck Island Creek, and Mechunk Creek. Throughout it’s journey, the river tells the remarkable and sometimes hidden story of our region’s geology, ecology, and history.

From the dawn of time, humans have been drawn to rivers as sources of sustenance, transportation, and spiritual life. Long before English colonists named it for Queene Anne, Monacan Indians made their home along its banks. For thousands of years, American Indians made their way in dugout canoes along the river. As English colonists appropriated the region, they turned toward the Rivanna as a means to transport agricultural goods. Long, narrow, flat-bottomed craft called batteaux were designed to navigate these waters, carrying crops downriver to Richmond, where they could be loaded on oceangoing vessels.

In 1763, a young man named Thomas Jefferson led an early effort to shape the flow of the Rivanna for navigation. This began a long age, lasting into the 1900s, in which the Rivanna was harnessed for navigation and power. Two periods of dam building, including the construction of locks and canals, made the Rivanna the very nexus of economic life in the region. At one time, eight dams blocked the flow of the river. The ruins of this age, including the stones of the dams, locks, canals, and mills, can be seen alongside the Rivanna to this day. In 2007, the Woolen Mills dam in Charlottesville was breached to restore migratory fish habitat, making the full length of the Rivanna free flowing for the first time in nearly 200 years.

As we journey down the Rivanna watching wildlife, it’s good to remember that we are temporary guests in their home. Open your eyes and ears and you will quickly discover the great diversity of creatures, great and small, that live in and along the river. We respect these fellow inhabitants of our planet by watching them from a distance and leaving their home clean as we pass through.

Perhaps the most easily noticeable wildlife are the birds. Great Blue Heron and the smaller Green Heron will be wading the shallow hunting small fish. Belted Kingfisher may be perched on a branch over the river until they take off and fly downriver with their loud, rattling call. Look higher up and you may be treated to the sight of a Bald Eagle or Osprey. Both these fish-eating raptors have moved back to the Rivanna in recent decades as their local populations have recovered from near extinction during the age of DDT. Canada Geese may watch from the shore and several species of duck can surprise you by bursting into flight as you approach.

Looking down into the water or casting a line will reveal the rich fish life in the Rivanna. The fishing for Smallmouth Bass can be quite good on the river. For the casual observer, the most prominent species will be the dramatic Longnose Gar. These prehistoric fish might look scary, but they pose no threat to humans. They like to bask in the sun just below the surface of the river, so they are easily spotted.

Because of their tendency toward nocturnal activity, mammals are the hardest to observe on any given trip. While the Rivanna is home to Beaver, Muskrat, Mink, and Otter, you can count yourself lucky if you spot the latter two!

A concise yet descriptive summary of the Rivanna’s wildlife can be found on the Rivanna Water Trail Map and Guide, published by the Rivanna Conservation Alliance and available for sale from the Rivanna River Company.

We are located in a beautiful riverside field, behind the Pie Chest and Lone Light Coffee. Plug in directions to 1518 E. High St, Charlottesville, VA 22902, turn into the lot...then follow the signs to find us along a gravel road out back!
© Rivanna River Company . All rights reserved.